Missed out on Connect? Well, we won't hold that against you, check out some of the highlights from the world-class keynote, awe-inspiring speakers. Spend 30 seconds getting to know each of these impressive individuals. 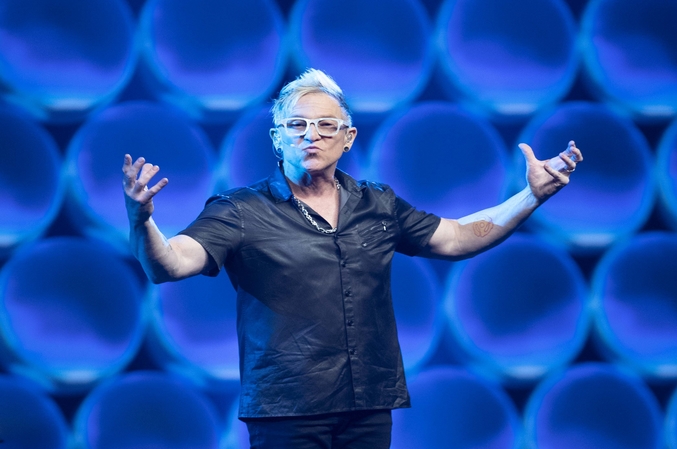 P!NK drummer Mark Schulman rocked the Gold Coast Convention and Exhibition Centre and got 2,500 mortgage brokers and real estate agents off their feet to hack their inner rockstar attitude.

Speaking at the Ray White and Loan Market Connect 2018 conference, Mr Schulman told delegates that simple changes in their attitude could create ongoing abundance and success.

“You have to change your ‘I have to’ to an ‘I get to’ and just see what happens as I know it will change your day and charge your life,” Mr Schulman said, who was performing in Brisbane with P!nk this week.

“Making a decision is an attitude shift. P!nk calls me Disneyland as I exercise the power of positivity by having an abundant mindset instead of scarcity. She says I am the happiest guy in the world,” he said.

“The fact is you cannot have a positive and negative conscious thought at the same time so by shifting to positive you are shifting to abundance. If you shift your mindset, then you attract abundance.”

Mr Schulman told the Connect 2018 delegates to be fully engaged at all times, which boosts the immune system too.

“Once you are actively listening, you are not distracted and able to respond in real time which is the true foundation for the greatest rockstar performance,” he said.

“The most sustainable rockstars on the planet know they have to have the best time during a performance to perform at a higher level. Rockstars love to party, but it’s all in the attitude.”

Mr Schulman said you don’t have to be a rockstar to have a rockstar attitude, everyone can control their thoughts and mindset.

“Own it. Your attitude drives your behaviour,” he said. 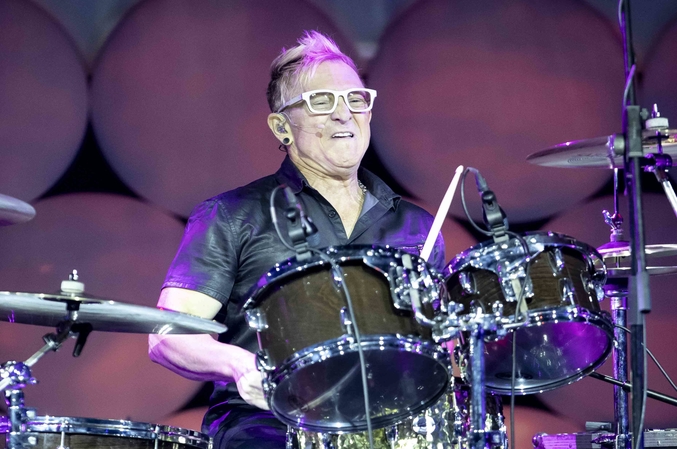 He recalled pop star David Bowie once told him that he sang like it was his last note.

“That was my lightbulb moment,” Mr Schulman said.

“So when you are on point and closing those deals. It’s the difference between attitude, passion and energy – it is the driver that motivates you to do better. What happens after the passion wears down? It’s purpose.”

It’s all about reconnecting with the reason behind the action.

“You need to reconnect with your ‘why’,” he said.

“I do it because when I make a decision that every single note matters, it all matters. Make it fresh and new, play your butt off and you need to be so connected otherwise the audience doesn’t get it. Rockstars live in the moment. Life is a series of nows, and how you choose that attitude right now and that behaviour is determining the consequences of now. It can be like a party but with substance. It’s a hell of a lot more fun. I’m a rockstar and I love to have fun.”

Mr Schulman said there were 120 people on P!nk’s tour and everyone’s attitude must match hers.

“If there’s a missing link, people get fired. So it’s all about the ABC, it is not just about you. P!nk chooses people who are as good at what they do as she is and everyone needs to take responsibility for their part.” 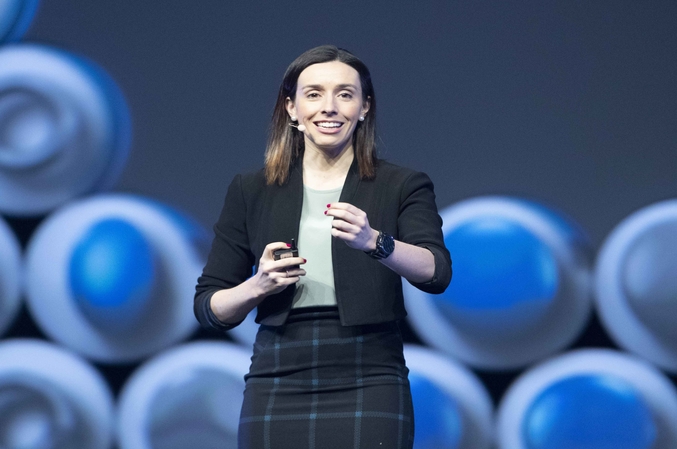 Emergent CEO Holly Ransom hit the stage to talk to the audience about harnessing change in a rapidly evolving world.

The exciting young entrepreneur heads up a company specialising in disruptive strategies.

“The world is changing at a rapid pace,” Ms Ransom said.

“We can’t just continue to do what we’ve always done. Millennials are changing the world we’re in. By 2028, one in every $3 will be earned by millennials. As agents and brokers, you need to understand this market. What will their needs be and how are you preparing for this change?”

Ms Ransom also touched on the impact of understanding the ‘why’ in what we do.

“Know who you’re talking to,” she said.

“Position your ideas to the people you’re trying to talk to, to see their ‘why’ in your ‘why’. To see their idea in your idea.”

Anna Meares, Olympic champion
The fighting spirit of a champion 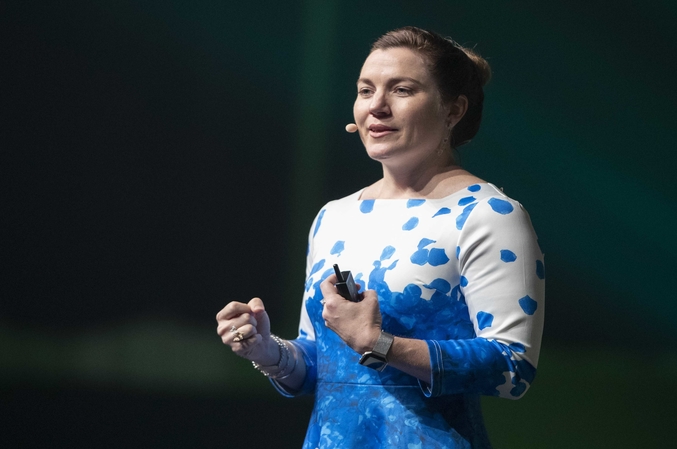 In January 2008, just seven months before the Beijing Olympics, she broke her neck in a horrific track accident at the World Cup in Los Angeles.

During the high-speed crash at 65kmh, she broke a vertebra, dislocated her right shoulder, tore ligaments and tendons and scraped off skin from all parts of her body.

The injuries would have ended most careers, let alone a shot at Olympic glory. 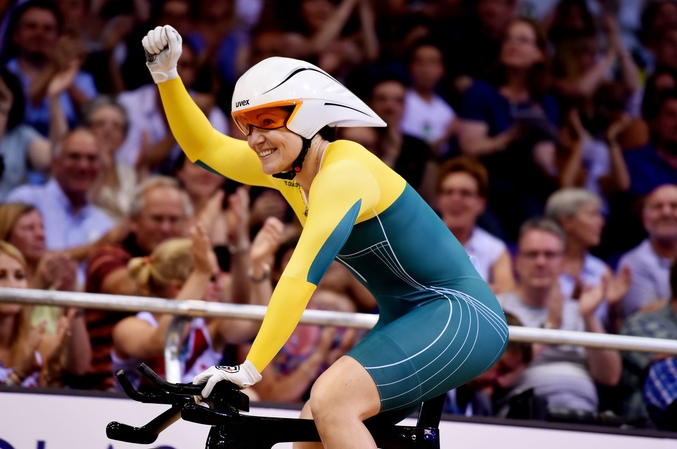 Not Anna. She ditched the neck brace and wheelchair to be back in the saddle 10 days later to start training for Beijing. That in itself is a legendary effort.

“I want to share with you some of the challenges I’ve faced, the highs and lows in my 22-year career, and a great deal of success. I was 11 times a world champion,” she said.

“My success has not been defined by my defeats along the way.”

The coal miner’s daughter from Rockhampton who moved to Adelaide for her sport reminded the agents that goals need to be constantly reassessed and re-evaluated.

But “you cannot control illness and injury as an athlete”.

“The last thing I needed was accidents and injuries, and that’s exactly what happened to me in LA. I got out of my seat and accelerated, and the outcome was not what I wanted,” Ms Meares said of the accident.

Track bikes have no brakes, a fixed wheel and only one gear.

“Travelling at high speed you expect accidents, and that day I heavily bruised my right hip and I tore tendons in my arm and shoulder, skin burned on my face and it took two hours to scrub my wounds clean and I also broke my neck. It was the force with which my head bounced off the track that caused the break and I was within 2cm of a total clean snap,” Ms Meares said.

“After I broke my neck you find out how heavy your head is and I couldn’t even hold my head up on the bike.”

She lost the sprint race by one-thousandth of a second – the width of a lead pencil line.

“It’s the accumulation of small things that affect your life.” 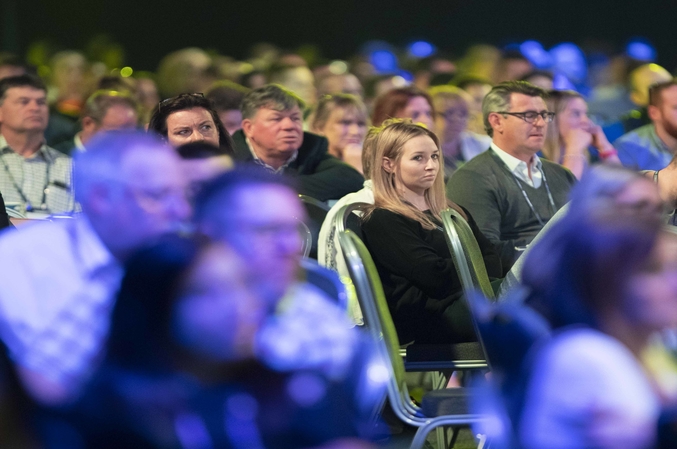 Just seven months after the accident she won a gold medal.

“I know I am brave and resilient, yet I didn’t know how capable I was to endure pain and discomfort,” Ms Meares said.

“Most people do not know the full extent of their potential and in adversity, you ask a few tough questions. Is that worth it? Is it worth the training to get back into the green and gold?

“Everyone has an opinion and the only option that mattered to me was that I saw great value in wearing green and gold.

“My parents and my siblings asked me not to continue but they backed me and my value and my passion, so it helped me to stay motivated, and we pushed through the tough times.”

She said she learned about controlling the controllables during her rehabilitation.

“I had to choose who to surround myself with. I was very reflectful on the energy that people brought to me as I adopted a victimised mentality around negative people. But if I was around people who were driven, happy and motivated in my company, then so was I.” 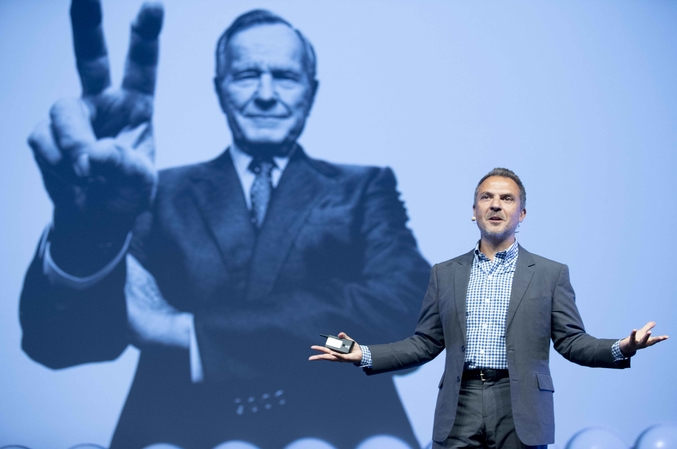 One of the world’s most renowned portrait photographers – having photographed more world leaders than anyone else in history simply wowed the crowd on the Gold Coast to close the Connect 2018 conference.

He enthralled the Ray White and Loan Market brokers and agents with a recap of the time he got to photograph former US President George W. Bush at his ranch in Texas.

“When you step down from a position of responsibility you have time to reflect on your own legacy and he didn’t want me to document that regret forevermore,” Platon said.

“In every single picture, he gave me a mask, a big cheesy smiling mask. W. Bush is notoriously camera shy and when I arrived at his ranch he poked his fingers into my chest and said, ‘you better be photographing a guy who is happy’. So I don’t presume to speak for my sitters but all I can do is give you my take as I am seeing it as I happen to be in the room.” 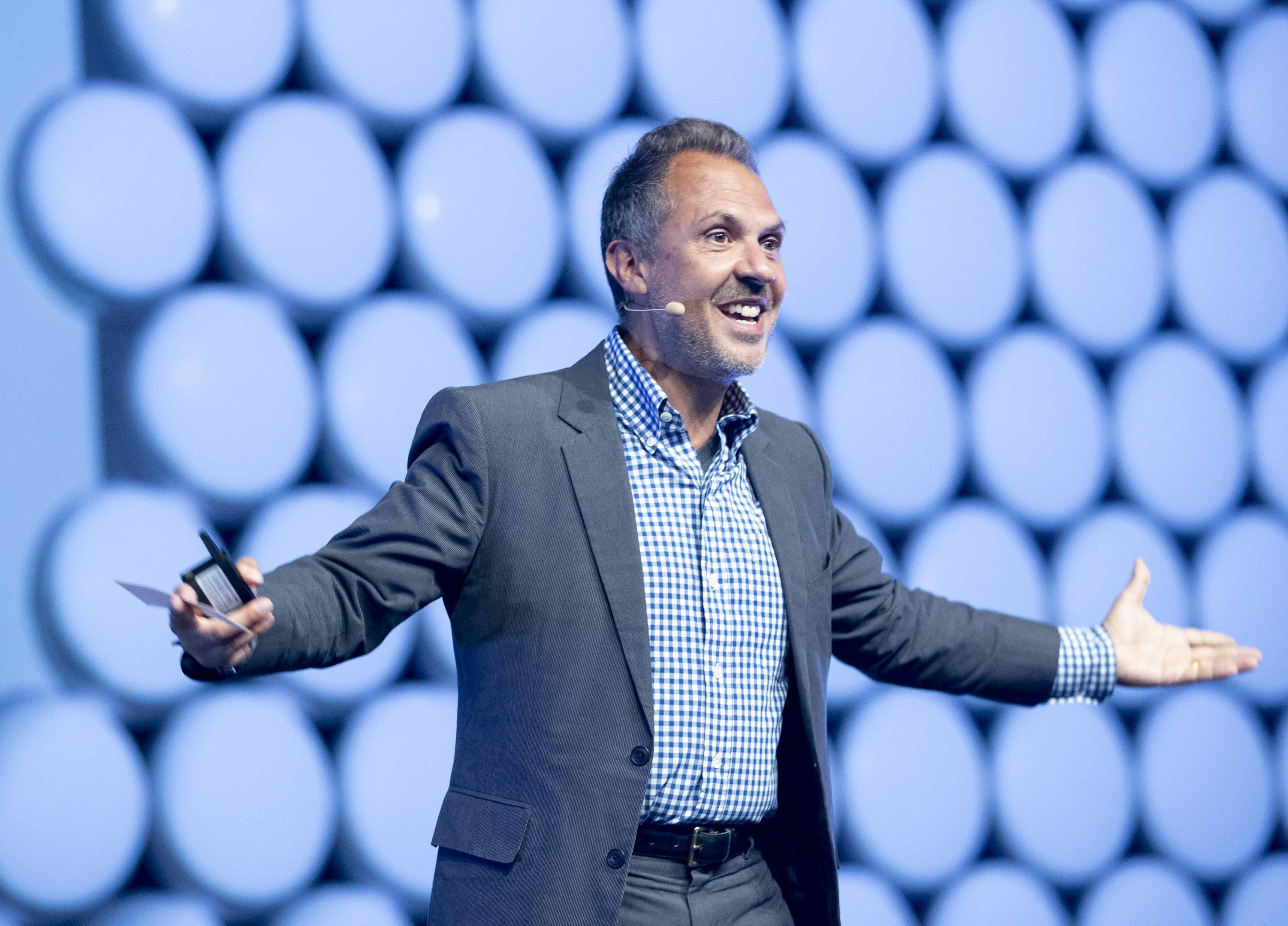 Platon also recalled the time he captured the last portrait of US President Bill Clinton while he was still in the White House.

“I was Esquire Magazine’s fourth choice and they wanted a dignified headshot of their president,” he said.

“They closed down a 200 room hotel to do this picture and I only had eight minutes to do the photo. I saw the motorcade arrive as I was setting up my lights and it was just like in the movies and as time was running out I called to Bill and said, ‘show me the love’. His adviser warned him not to show me the love but Bill knew exactly what I wanted.”

Platon asked the delegates – what would they do if they were not afraid? It was a question that tech titan Mark Zuckerberg of Facebook asked him during his portrait sitting.

“I’ll be honest, fear plays a huge part of my life,” Platon said. 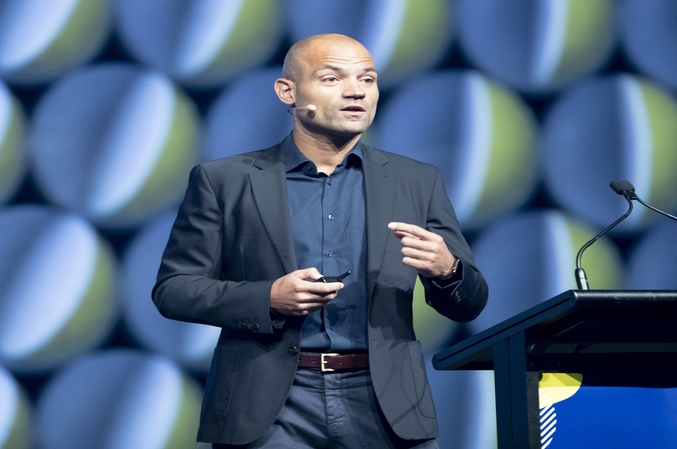 Storyful CEO Sharb Farjami was another to take to the Connect 2018 stage, sharing his insights into the world of social media and fake news.

“The vast majority of content you consume (80 per cent) is generated by users,” he said.

“When you think about quality control and fact-checking, it’s hard to control this when so much is generated by users. And it affects markets in a serious way.”

Storyful was created to address the rise of this fake news, disseminating the difference between fake news and what is actually happening in real time.

“The riskiest thing for a newsroom to do is to publish something that’s not true,” Mr Farjami said.

“Unfortunately quite often we see people and brands get caught up in issues. You can’t unsee what you’ve seen. They think what they think and they move on. There’s no time for correction.”

Mr Farjami told the audience that the impact of fake news spreading on social media can have long-term damaging effects, often catching brands and businesses off guard.

“Social media is extremely positive when used for good, but that is not currently happening and companies need to be aware about what is being said about them so they can adapt and respond,” he said.

“Most people live in an echo chamber of their own point of view.”