The Ride for Cancer

So yes I did it, I Conquered The Ride For Cancer. It was an absolutely awesome event to be part of and something that made me very proud, humbled and inspired.

There were over 1300 riders in total who combined raised over $5.2 Million dollars for Cancer Research in WA. I would like to thank all of those that sponsored me listed below. Your generous donations enabled me to challenge myself and take part in this amazing event and all those funds are being used for researching cures for Cancer in WA. I would like to personally thank those below for your generosity.

The Ride
The ride itself was always going to be a huge test for me but turned out to be harder than expected. I only started riding in Jan of this year when I got my road bike. From Jan to the end of April I did about 3 x 30K rides, 4 x 60K and 1 x 73K ride. I went out about 3 weeks ago for my first ride since April, did 47K’s before the crank broke on my bike and I landed in a heap on the floor. So to say I was not the best prepared to ride 220k’s in two days is a little understatement. Yes my previous furthest was 73K’s but now I was challenged with 104K’s one day and 116K’s the next. 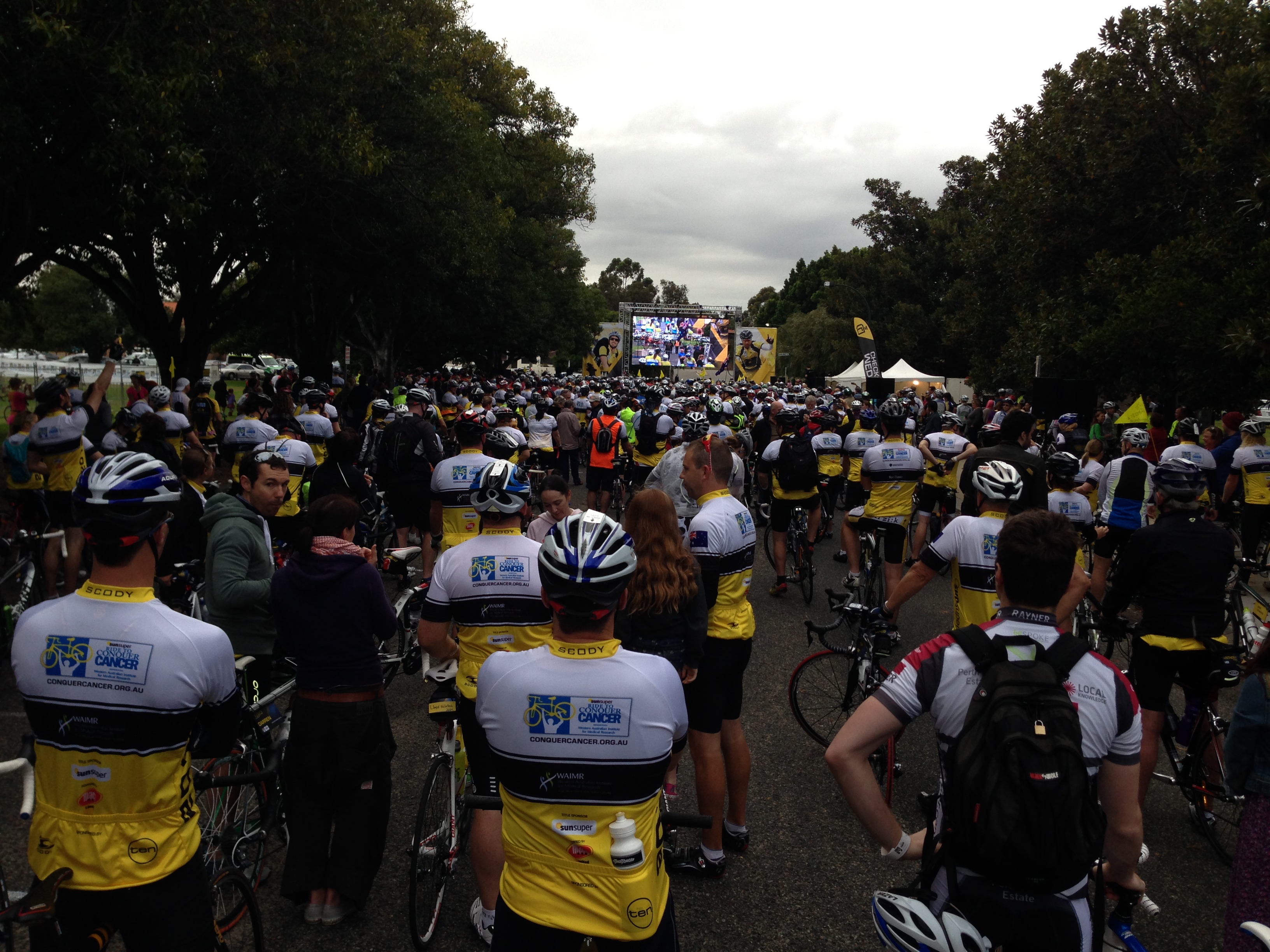 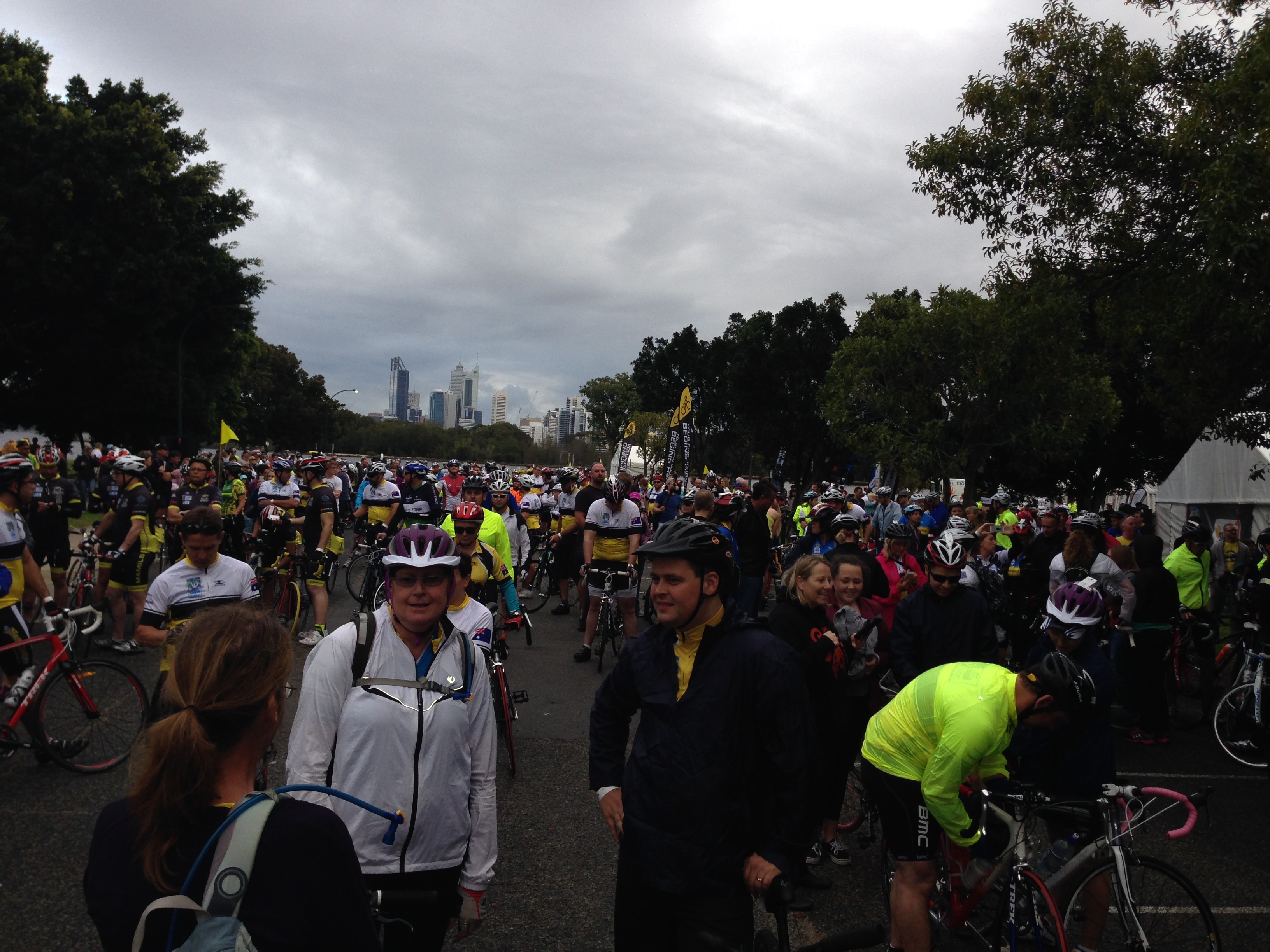 The Start Line
So it all started with everyone excited and eager to get going. I was standing next to a lady waiting to start and noticed some photos on her bike. I introduced myself and asked her about them, she just burst into tears as she tried to tell me that one was of her mother whom she lost to Cancer 4 yrs. ago. She was doing the ride for her and this just was a stark reminder as to how Cancer effects so many people, not just those that have to suffer and fight the disease. Nicole and I ended up riding the whole way down and back together and kept each other going through the tough moments and also kept each other entertained.

So we got started. However no sooner that we started the rain started too. It made for some tricky conditions which resulted in a few injuries with one person breaking their collarbone. After the half-way point for day one we hit this very long, straight road that just seemed to go on for ever and ever. The wind was in the face and by this time my feet were feeling like ice blocks. This leg between pit stops was 30k’s and it seemed to go on forever. It was without doubt the hardest point of the ride. At one point we asked a Marshall how far we were from the pit stop to be advised only 3k’s. Great we thought, not far for some food, drinks and a little rest. 3k’s turned into 7k’s which felt like 50k’s and I felt like turning around and paying that Marshall another visit lol.

After we made it to camp I got my gear and headed to my tent but as soon as I lay down in this tiny tent (that I had to share) then I started cramping up. Both my inner legs seized up in pain and all I could do way lay on my back and try and relax, this went on for about 30 mins with every movement I made causing the cramp to set in again. At this point I thought I had pushed things too far and was not looking good for Sunday. However when I did manage to get out of the tent I headed to the St Johns who iced my legs for a while which helped them recover. 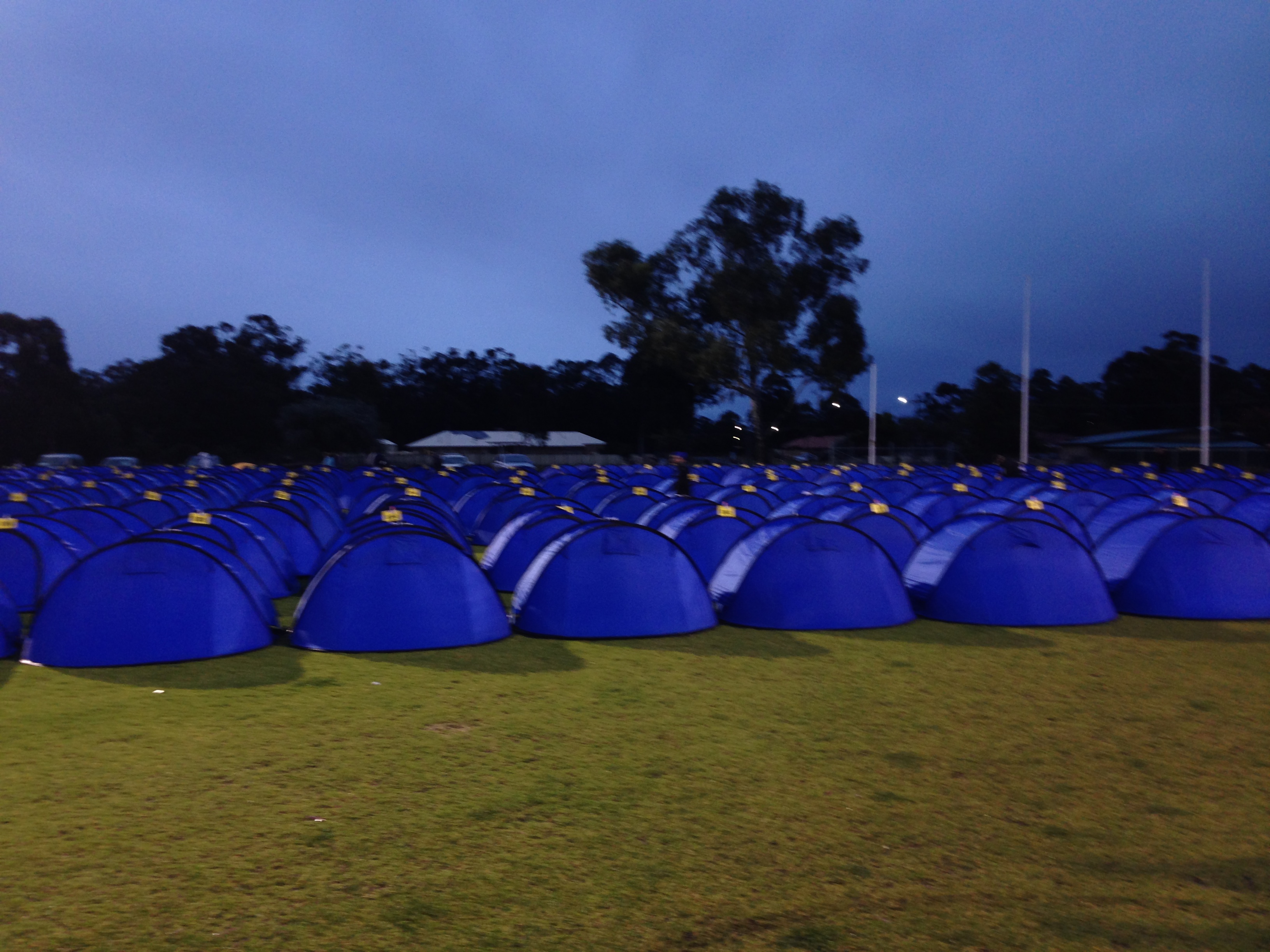 The Hotel for the Night
The ride back was longer. I had on the previous day achieved a PB of 104K’s and now I had to beat that again with 116K’s. As soon as my butt touched that seat I was in agony. It was soo sore as it just wasn’t conditioned for this amount of sitting on such a thin uncomfortable seat. However the finishing line was ahead so just keep pedalling. After a couple of hours the Sun came out for the first time and the temperature rose. We had a light wind behind us helping us along and I actually found the ride back easier. It was long and painful but more enjoyable.

Yellow Flag
I might not have been best prepared which made my ride a whole lot harder. I might have been suffering with cramps, sore buttocks and sore knees as I have severe arthritis in both. But none of this compares to when you see someone out on the road with a yellow flag on their bike. Those are the ones who are currently fighting or have beaten this disease and all my trials and tribulations pale into insignificance when you see these people out there on this ride. They were truly inspiring and made me feel very proud of what I was doing.

The Finish Line
As Nicole and I approached the final corner a feeling of great achievement hit me. I couldn’t quite believe that I had completed this. For some it is a ride that they would breeze through in a day but for me it was far more. We turned the corner and approached the finish line to cheers from the crowds who were there to give their support to everyone. It was an awesome feeling and I have to say a huge relief. 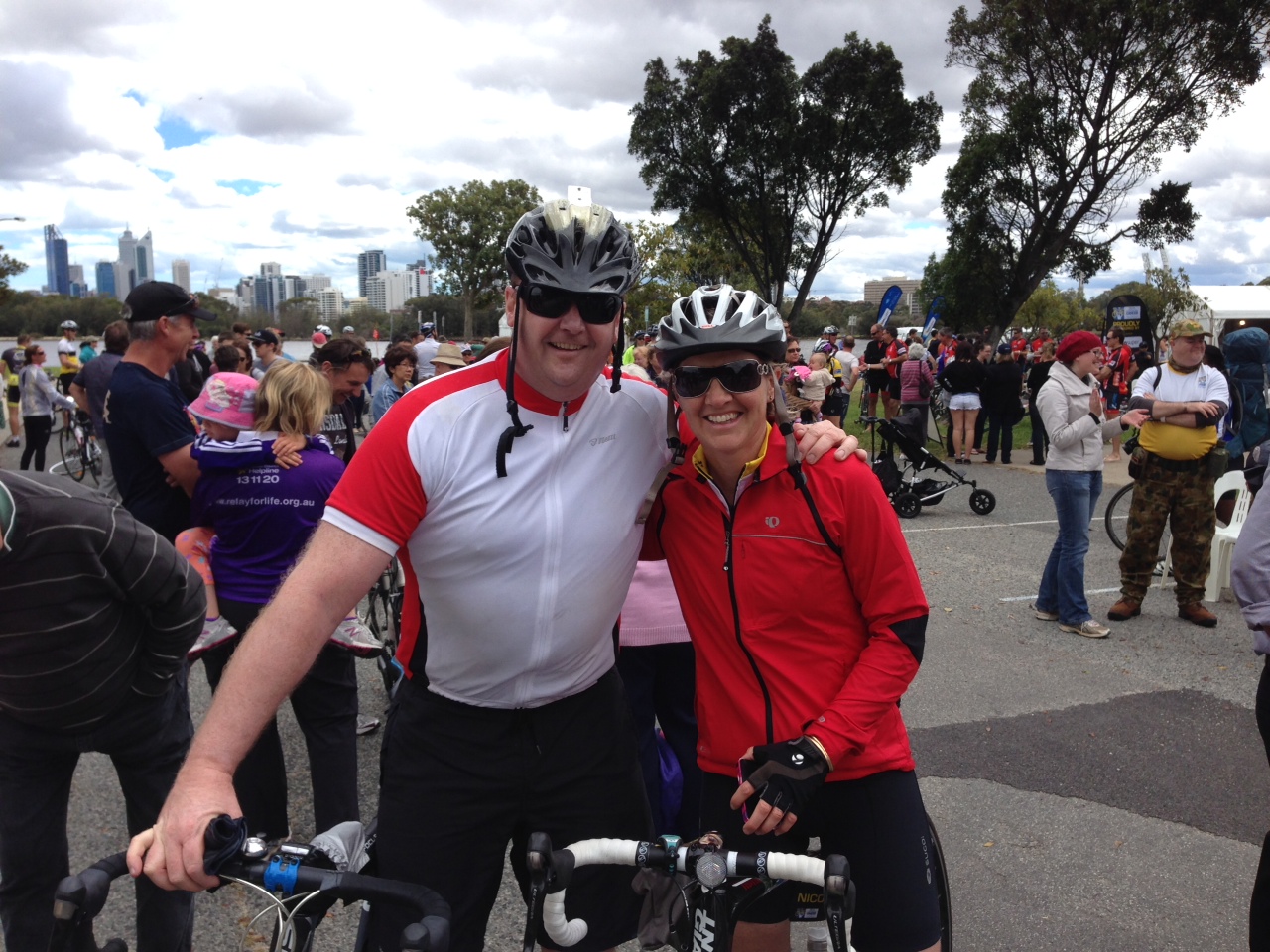 ….Nicole and I after the finish. 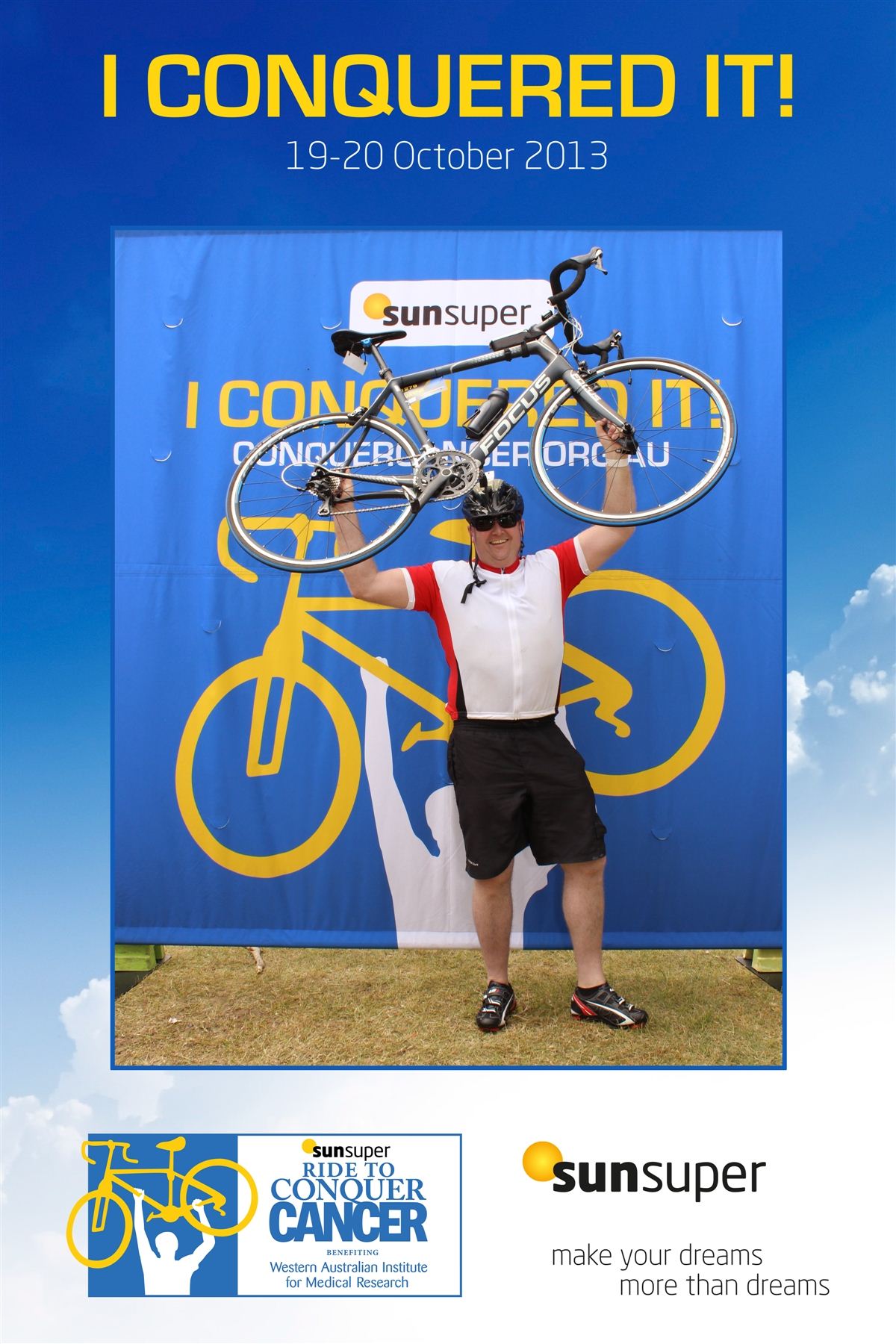